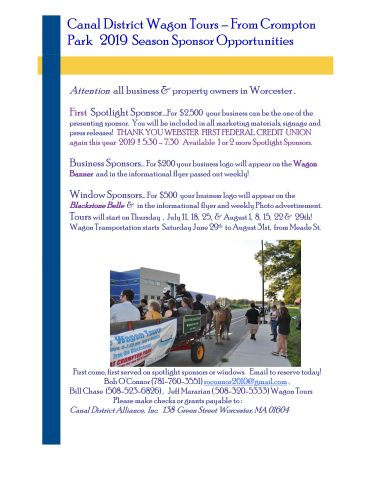 Â Email us at [email protected] for more information. 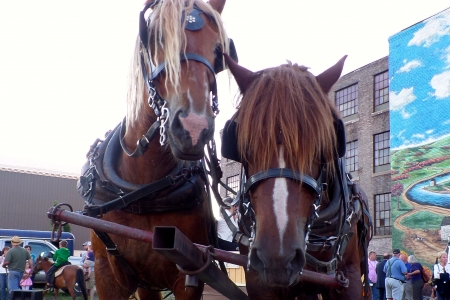 A project that started as community service and a little fun has matured into a summer staple. This project has been a work-in-progress and that is one of its biggest strengths. I remember the first summer we started. Just a group of friends who loved history, we could not believe the monumental contributions that our small city had made to the country as a whole. For years we had shopped, eaten and played in the Canal District and never realized that underneath the streets lay The Blackstone Canal, the beginning of a 45-mile long water road to Providence that sparked the Industrial Revolution.

Constructed between 1825 and 1828 by Irish immigrants, the canal was an outstanding engineering accomplishment. Its short lived period of operation, approximately 16 years, spurred economic and social development to such an extent that the town of Worcester soon became a city and the regionâs traditional household economy was forever transformed as goods of all kinds traveled to Providence and beyond at a fraction of the former cost.

Our present-day Canal District has embraced this story as fuel for its own rebirth. Each summer the Tours bring many constituencies together to reflect on the history that lies below the streets. Researched, written and presented by trained interpreters from South High Community School, most of whom are recent immigrants themselves, the tours offer participants a chance to follow the farm to factory story of the Industrial Revolution while riding on a wagon pulled through the District by Belgian Draft Horses. On top of the main narrative, illustrated by the built environment passing by, tour goers meet local figures from the past who are portrayed in the first person by the students. Through these tours, we truly hope to convey the fantastic history of Worcester, and the changes ignited by the Blackstone Canal. It is a story that speaks to the extraordinary sacrifices made by the Irish immigrants as well the people of Worcester who had to change their whole perception of the world as they knew it and eventually accept people very different from themselves. 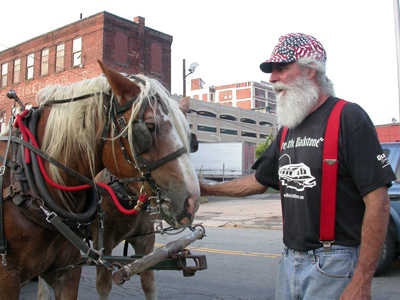 “Working on the tours from the very beginning has been a rewarding experience like no other. I have learned the art of public speaking and the importance of reading my audience in order to best captivate their attention. I have learned the difficult lessons of humility. Every time I have learned something new about the Blackstone Canal story, I have realized that there is so much more I need to think about and try to understand.

I have learned that it does not matter how much I know, but how well I convey what captivates me that is most engaging to our audience. Most importantly, I have learned the value of history and that change does not come overnight. The City of Worcester was not always this diverse or accepting of different people and cultures. Through this tour I have learned that to understand the present and the way Worcester is today, I must first understand its past interactions. That insight gives me the strength to move forward with the difficult work of truth telling today.”

What is unique about this tour is that it is our own. Every student tour guide has the freedom to research and portray those ideas that captivate him or her the most. As an immigrant, I am fascinated by the Irish, by their unrelenting strength, dedication and resilience as they built the canal while facing one obstacle after another. I am captured by their willingness to use their skills and sacrifice their physical and psychological well being in order to build a canal for a group of people who refused to acknowledge their genius. Through their story I have learned the value of pride in oneâs work. I have been startled by their wisdom as evidenced by their willingness to build the canal because they knew the world would change. They understood that although the forces of exclusion against them were great, the canal was their means of gaining access into Worcesterâs fearful and exclusive society in the place that was now their home. Their willingness to endure these harsh realities set the example for so many others and that has led to the creation of the diverse and accepting city of which I am now a part.

This tour project is unique because the students who do the research and portray the historical figures are unique. The tour script is the combination of all our research into the different aspects of the story that captivate us on a personal level. This process makes these tours our own and it creates a sense of ownership and pride. This causes each and every one of us to work harder, to complete more nuanced research and to improve every single time we present the tour in order that we may make a more honest and thoughtful contribution to our city. This is our tour about our city and the way we see it today from our perspective.