By The Canal: Historical Walking Tour

Preservation Worcester’s By the Canal Tour is a self-guided tour of the streets and buildings of Worcester’s Canal District.Â  This tour highlights eleven buildings that reflect the history of both the city and the neighborhood.Â  Nine were built before the Blackstone Canal, which first opened in 1828, was covered over in the late 1800s.Â  All retain much of their original architectural character.Â  With the By the Canal Tour you will uncover surprising bits of history and hear stories about the people, events and economy that made Worcester the city it is today.

You can pick up our By the Canal: Canal District Walking Tour brochure at Preservation Worcester’s office at 10 Cedar Street. Or you can download a copy and print it from your computer, from the blue links above.

Expand the sections below to hear either the short or extended versions of each tour stop. To take the tour in the suggested order, begin at Union Station and follow the sites numerically. 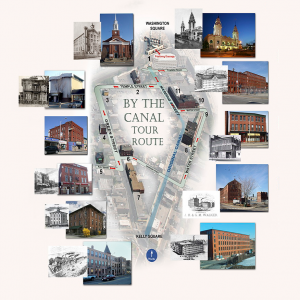 Visit our Walking Map page for a virtual tour of the Canal District in order of sites, with audio clips available for streaming. Each clip is full of great information about each historical site on the tour!

Visit our History page for more information on the origins, development and future of the Canal!